Ha Long, Vietnam: Bay of a Thousand Islands
Ha Long Bay is one of the New 7 Wonders of Nature.
3 Jun 2022 · By Adrian Padmodihardjo

Ha Long Bay, Vietnam, is one of the New 7 Wonders of Nature. The main attraction of this location is the existence of thousands of islands and islets scattered across the bay area. Those islands is actually a collection of towering limestone topped by rainforests.

This beautiful destination is located near Tonkin, northern Vietnam, and having an area of approximately 43,400 hectares 🙀. Despite the many islands in this region, those islands are actually not inhabited due to their steep contours. Also, the soil is difficult to cultivate.

The Legend of Ha Long

Legend has it that when the country of Vietnam was just formed, wars were still going on between the local people and the invaders. The Emperor then asked for help from the Mother Dragon to fight the invaders.

It is said that after the battle, a number of rocks protruded from the sea surface. The rocks are believed to be the teeth of the dragon gods involved in the battle.

To commemorate this event, local people refer to that area as “Ha Long”, meaning “descending dragon”. Another location in the same area is named “Bai Tu Long” which means “bowing down and showing respect to the dragon's children”.

According to the official website, there are many interesting spots in this area, including:

One of the most popular beaches is Ba Trai Dao beach, which means “three peaches”. This name describes the three towering limestone rocks facing the beach. Other popular beaches include Tuan Chau beach, Ti Top beach, and Bai Chay beach.

In this area there are also many caves that you can visit, for example the Kim Quy cave which means "golden turtle". The turtle is said to have helped defeat the invaders by lending the emperor a magic sword.

As previously mentioned, there are so many islands that you can visit here. Usually, these towering rocks are used as places for rock climbing, hiking, and parasailing.

On the coast of Quang Ninh, there are many hotels for you to stay during your vacation in Ha Long Bay. Check these out! 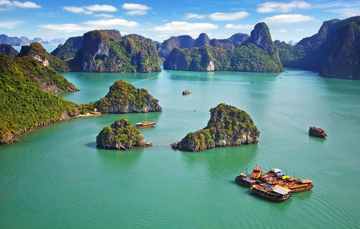