Elon Musk Stays At This Hotel In Shanghai
This Tesla and SpaceX boss is considered not only rich and genius, but also very modest
7 Sep 2019

Elon Musk recently visited Shanghai. After his visit, Musk received great sympathy and respect from social media users in China because the Tesla and SpaceX boss was considered not only rich and genius, but also very modest.

Elon Musk's activities in Shanghai are very busy. Elon Musk and Jack Ma (Alibaba boss) were keynote speakers on August 29 at the 2019 World Artificial Intelligence Conference. The next day, Elon Musk visited the Tesla factory under construction in Shanghai and met with China's Minister of Transport Li Xiaopeng.

Many social media users in China were surprised when Elon Musk chose to stay at Holiday Inn Shanghai because usually CEOs of big companies or billionaires would choose to live in luxury hotel with the best rooms and facilities.

In photos circulating on Twitter and Weibo (Chinese social media), Elon Musk can be seen walking out of the Holiday Inn hotel lobby and getting into a Tesla Model X car to go to the World Artificial Intelligence Conference.

Musk is no stranger to discomfort. During the difficult times of production of the Tesla Model X and Model 3, Musk would often sleep at Tesla's factory in Fremont to help with any issues that arose. The simplicity of Elon Musk who often leaves facilities and comforts is not uncommon for a CEO and billionaire who has a net worth of $19 billion USD. 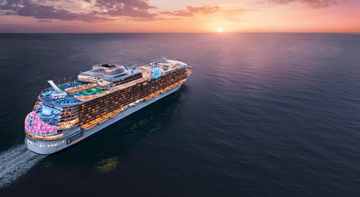 World's Largest Cruise Ship To Start Sailing From Shanghai In 2021