National Stadium located in Kaoshiung, Taiwan  is a circular building shaped like a snake or dragon. The stadium was built as the main venue for the 2009 World Games. This stadium has the largest capacity in Taiwan and is also the largest solar powered stadium in the world.

The stadium which has a capacity of 55,000 seats was designed by the famous Japanese architect Toyo Ito. From the air, the stadium looked like a curved scaly dragon or serpent.

Between the head and tail there is a gap which is the entrance to the stadium. The roof of the stadium is covered with 8,844 solar panels that look like snake scales, making it the largest solar powered stadium in the world capable of supplying 1.14GWh of electricity per year.

The energy generated is more than enough to power 3,300 stadium lights and two giant television screens. When the stadium is not in use, the Taiwanese government can supply energy to the local residents' power grid.

Another innovative feature of the National Stadium is that it was built using recyclable raw materials. The stadium is also designed with the wind direction in mind during summer, allowing air to circulate and provide natural cooling. 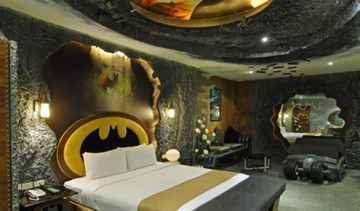 You Can Stay at Batman Themed Hotel In Kaohsiung, Taiwan
Trending Now