The Leeds Corn Exchange is a Victorian building in Leeds, West Yorkshire, England, which was completed in 1863.

The Corn exchange was designed by Cuthbert Brodrick, a Hull architect best known for Leeds Town Hall, and built between 1861 and 1863. The dome design was based on that of the Bourse de commerce of Paris by François-Joseph Bélanger and François Brunet, completed in 1811. In the late 1980s Speciality Shops plc restored it and converted it into a retail facility.

After a further restoration in 2007, the Corn Exchange re-opened in November 2008 as a boutique shopping centre for independent retailers. The 13,200-square-foot (1,230 m2) ground level was occupied by Piazza by Anthony until its sudden closure in June 2013. 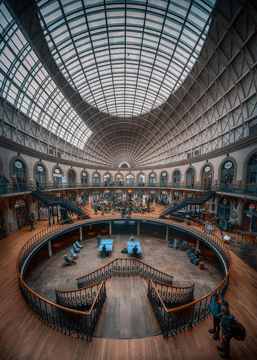