Luxurious Dalat King Palace
This luxurious palace in Dalat, Vietnam is a legacy of the last king of the Nguyen Dynasty
21 Sep 2019

This luxurious palace in Dalat, Vietnam, a legacy of the last king of the Nguyen Dynasty, has an escape tunnel that leads directly to the helipad.

The palace was built by French millionaire Robert Clément Bourgery in the city of Dalat, Lam Dong Central Highlands province, at an altitude of 1,550 meters in 1933. Bao Dai purchased the property and made it the residence of the head of state of Vietnam during the French colonial period. Bao Dai, whose real name was Nguyen Phuc Vinh Thuy, was the last emperor of the Nguyen Dynasty.

The palace, which covers 18 hectares of land, was reopened to the public in 2015 after restoration. The palace building itself has an area of 818 square meters, two floors and 12 rooms. The first room at the main entrance is the reception and workplace of head of state Bao Dai and his officials. This room has a characteristic French architecture with yellow walls and green windows.

The most important room is located on the second floor. The Cabinet Office was the venue for important meetings presided over by Bao Dai. There is also the bedroom of Bao Dai and his wife Nam Phuong. In this room there are wax statues of the two figures.

In Bao Dai's office, there was an escape tunnel hidden behind a bookshelf. This tunnel has a length of hundreds of meters and a depth of 10 meters made of concrete and steel which leads directly to the helicopter pad behind the palace. 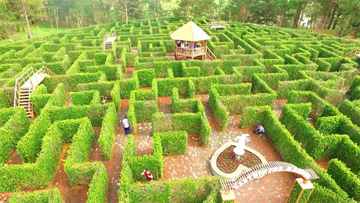