Goddess Kwan Im (Guanyin) Pavilion Still Standing After 700 Years
The Temple of Goddess Guanyin is perhaps the most formidable building in the world.
5 Mar 2022

Perhaps the most formidable building in the world can be found on the Yangtze River in China, where it has stood for the last 700 years. Goddess Kwan Im (Guanyin) Pavilion, also known as the Goddess of Mercy Pavilion, is a temple located in Ezhou City, Hubei province, China.

It's been around for 700 years, and maybe forever.

Goddess Kwan Im or Guanyin is a Buddhist goddess associated with great love. She is often referred to as the "Goddess of Mercy" in eastern culture. This Goddess Kwan Im (Guanyin) Pavilion was built to last, maybe forever. This temple has stood on a large rock in the middle of the Yangtze River in the city of Ezhou in China for 700 years.

The great architecture of ancient China

During the rainy season and when the tide rises and covers the foundation, the building seems to float. The Guanyin Pavilion, also known as the Goddess of Mercy Pavilion, is not open to the public, but many tourists are still willing to swim to see and admire this temple up close. This durable building also highlights how great the construction and building skills of our ancestors in China were. 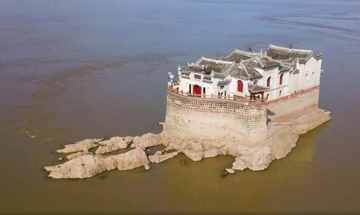 Ezhou, China
This Chinese Architecture Has Been Standing For 700 Years
Trending Now