Bihun Bebek Kumango is one of the legendary restaurants in Medan City. This restaurant has been around since 1967 and is now managed by Mr. Asie (The Second Generation). Bihun Bebek Kumango uses herbal broth to make it easier to lose the fishy smell of the duck since it is pretty tricky to process the duck and remove the fishy aroma. However, this place can still use the original duck broth, and the flavor is still consistent.

The main menu in this place is duck noodles. The generous portions and meat are the hallmarks of Bihun Bebek Kumango. The gravy is so thick in aroma and taste that it comes from a large amount of duck meat.

In the bowl, there is chewy rice vermicelli and large pieces of duck meat, tender and abundant without a fishy smell. In addition, there are lots of fresh mustard greens and a splash of sweet, salty, and of course, tasty duck broth.

Bihun Bebek Kumango has two size variants, namely small and large sizes. The price for the small size is IDR 100,000, and the large size is IDR 160,000. 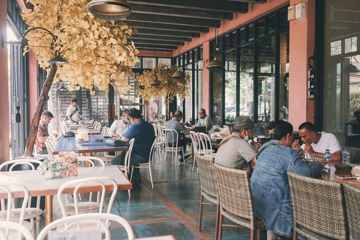