Red Panda, Does It Really Exist?
Looks cute and pretty charming, but does it really exist?
24 Mar 2022

Turning Red, a cute animated film by Disney and Pixar that just released on March 11, tells the story of Meilin "Mei" Lee, a 13-year-old boy who turns into a red panda when he is emotional.

For those of you who have watched the film, you must be wondering, does this red panda really exist or is it just fiction?

It turns out that this red panda animal does exist and is often found in countries such as Nepal, India, Bhutan, Myanmar and China. The red panda has a face that resembles a giant panda, a long tail and furry stripes like a raccoon and behavior like a cat.

Red pandas are nocturnal animals, they sleep in trees and look for food at night. After waking up, they clean their fur and lick their paws like cats.

For travel buddies who want to see this red panda animal first hand, you can visit zoos in big cities in America, Australia, England, China and Japan.

For those who haven't watched the Turning Red movie, hurry up and watch it on the Disney+ Hotstar app.

Where to see red pandas?

If you are interested in seeing red panda in real life, the best places are around Chengdu, China, also known as “pandas hometown”. 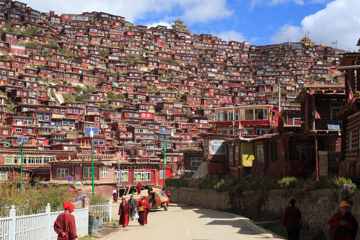