As Asia continues to reopen, country after country, the most recent restriction to be lifted is Cambodia which has just opened to international travelers who are fully vaccinated without quarantine or PCR/antigen entry tests. As travelers commit to the bucket list trips they've missed over the past two years, the country should be a prime destination as home to one of the world's most iconic sights, the massive 12th-century Angkor Wat temple complex. And with tourism just starting to flow again, it's possible to experience this landmark without navigating the hordes of other visitors as it has in the past. So the time to go is now.

The Explorations Company, which organizes high-level and authentic indigenous trips throughout Asia, Africa, Latin America, and the Polar Region with a portion of the costs going to philanthropic efforts, is currently arranging a four-day visit to Siem Reap, the site of the temple. Extensions are also available to other parts of the country.

Among the key arrangements in the company's plans: check-in at Amansara, a suburban Aman property built in the 1960s to accommodate King Sihanouk's guests. Starting on day two, a visit to Angkor begins with a visit to the Roluos group of temples, some of the earliest examples of Khmer temple architecture including the important Bakong temple which still houses an active Buddhist monastery. After sightseeing the majestic shrine, guests will receive a special blessing from a senior monk for prosperity and good fortune, an important gesture now more than ever. Later in the day, guests are guided through the temples of the deep forest of Ta Prohm as well as the ancient city of Angkor Thom, the largest city in the world during its heyday in the 12th century and the last capital of the Khmer empire. Sunsets are experienced with champagne at sunset on a relaxing boat trip in the Angkor Thom moat.

Day 3 is to explore Angkor Wat, the world's largest religious complex, starting at sunrise by private helicopter or hot air balloon flight over the site. A Khmer scholar then leads guests through the complex, explaining its history, significance, architecture, and ongoing restoration. In the afternoon, guests can make their way to the countryside to visit local villages or learn to cook local dishes at a village house. In the evening, dinner is set in a rustic setting, accompanied by traditional Khmer music.

The next day, guests head off the beaten track by helicopter to the ruins of Koh Ker, the lesser-known former capital of the Khmer Empire in the 10th century, anchored by a seven-story pyramidal temple deep in the jungles of northern Cambodia. Another option is to visit Tonle Sap, Southeast Asia's largest freshwater lake, and explore the floating village by boat. In the evenings, there are performances featuring Cambodia's history and modern through music, dance, theater, and circus performed by students and graduates of the Phare Ponleu Selpak vocational training center in Battambang – an association formed to help underprivileged Cambodian children and troubled and youth through various outreach programs. The brutal Pol Pot regime of the mid-1970s was responsible for genocide—roughly 25% of the population—including executing anyone suspected of being an intellectual, instilling a long-standing fear of education in a population that various nonprofit groups have resisted.

Following activities in Siem Reap, travelers looking for a more adventurous adventure can head to designer Bill Bensley's Shinta Mani Wild featuring designer tents, wildlife viewing, fishing, and mountain biking in the Cardamom Mountains. For a more serene journey, a short flight to Sihanoukville and then a 45-minute speedboat takes tourists to Song Saa, a private island in the Koh Rong Archipelago known for its pristine location on the Gulf of Thailand and natural architecture with villas made up of reclaimed sandstone. and woodwork, handcrafted driftwood furniture, and paintings by local artists. The owners are spearheading the conservation movement, protecting local waters and the resident turtles, seahorses, and exotic fish. And their foundation sponsors agriculture, education, and health initiatives for the local community, meaning that each guest staying can contribute to the well-being of the people who live there, an increasingly important part of the overall trip. 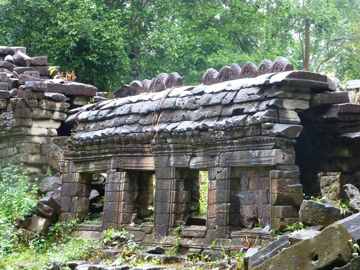