Bhutan: The Happiest Country in Asia
Did you know? Bhutan is a carbon negative country in the world
5 Apr 2022

Bhutan is the last Himalayan kingdom, covered in stunning snow-covered Peak Mountains and shadow forests that create a beautiful landscape. But that's not all, the unique and best thing about Bhutan is that it is the only country that is 72% forest covered, making it not only carbon neutral but the only carbon negative country in the world.

Known as the last Shangri La, this kind of country is certainly the best place to visit for family vacations, honeymoon tours and even for adventure vacations. And to be a part of this enchanting place, you can share your own Bhutanese experience through our list of the top must see and do attractions:

Its peaceful and serene beauty and clean air, surrounded by rugged mountains, lush green fields and historical buildings make Paro the most popular destination in Bhutan. It is here in the city, where the only international airport can be found. Thus, Paro receives the maximum number of tourists throughout the year. There are frequent visits to interesting dzongs such as Paro and Zuri; monasteries and palaces such as Paro Taktsang (Tiger's Nest Monastery), Pelri Goemba, Pelri Ugyen Palace. Other top attractions include temples, monuments and museums such as Bondey Lhakhang, Khankhu Lhakhang, Tago Lhakhang, Druk Choeding and the National Museum.

Another amazing destination in Bhutan is Punakha and this place is mostly visited by adventure seekers. However, Punakha is widely known for its 17th-century fortress Punakha Dzong which stands majestically beside Pho and Mo Chhu. This Himalayan city hosts traditional mask dances and music during Punakha Tshechu–Bhutan's religious festival. The feeling this place offers is unreal, and that's why many people visit here mostly to understand Bhutan's culture and history and to enjoy its divine natural beauty. Surrounding the city in the Punakha Valley, there are several must-see attractions such as Chimi Lhakhang and Namgyal Chorten. From these points, one can get a good view of the river and mountains.

Another place to visit in Bhutan is Wangdue Phodrang, a beautiful and serene city. This place is located in Central Bhutan and is a border town near Punakha. Wangdue Phodrang is widely known for its bamboo, slate and stone carving products. Another notable attraction here is the Wangdue Phodrang dzong which is open to visitors only during the Wangdue Phodrang Tshechu celebrations which are held during the fall. With the confluence of Punakha Chhu and Tang Chhu, Wangdue Phodrang provides fertile pastures for livestock and offers attractive views. While here, the most visited tourist attractions are Radak Neykhang, Archery Ground, Vegetable Market, Army Training Center, Dzong Gate and Eight Chortens.

Where to stay in Bhutan? 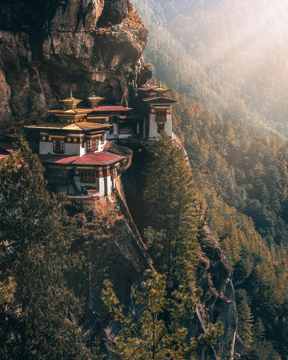 Helsinski, Finland
20 Happiest Countries In The World In 2022
Trending Now