6 Best Place To Visit in Vietnam!
Vietnam is a fantastic blend of natural and cultural diversity.
8 Jun 2022 · By Ayurizka Purwadhania

Vietnam is a stunning blend of natural highlights and cultural diversity. While Vietnam's long history and multicultural population (with more than 50 ethnic minority groups) make a trip here rich in heritage and experience. This enchanting country is full of surprises and is one of the most underrated destinations in Southeast Asia. The following are recommendations for tourist attractions in Vietnam!

Halong Bay is one of the best places to visit in the world for its stunning ocean views and is a UNESCO World Heritage Site. Thousands of limestone islands lie within this bay in the Gulf of Tonkin, eroded into jagged peaks by wind and water over thousands of years.

This is a prime cruising area with bay views that are best seen by boat. Opt for at least an overnight tour to see the iconic sights of Halong Bay because day trips don't do it justice.

For big-city fans, no visit to Vietnam is complete without a visit to Ho Chi Minh City, the bustling commercial hub of the country. The streets are lined with motorbikes and cars, the restaurants and cafes are cosmopolitan, and the shopping is some of the best in the country.

One of the most historic cities in Vietnam, Hue, is full of relics from the 19th-century reign of emperor Nguyen. Situated along a picturesque riverbank, Hue is a large site nestled within a wall that stretches for 2.5 kilometers.

One of the best places to visit in Vietnam for the World Heritage-listed Phong Nha-Ke Bang National Park. This cave stretches as far as 31 kilometers underground. Tu Lan cave is a "wet cave," and a visit here, you can try to swim through the cave system river. Another popular excursion is to the Phong Nha Caves, where the interior is accessible by boat.

Surrounded by mountains covered in dense forest, My Son is the ruins of a Cham-era temple town dating back to the 4th century. This old Hindu religious center was still very much in use during the 7th to 10th centuries and only underwent a complete decline and was abandoned during the 13th century. There are about 20 temple buildings still standing here, all built of brick or sandstone blocks and displaying exciting influences from various Asian empires, including Indian and Malay.

Hoi An is a city whose historic architectural style is still alive. The old town area is fun to explore, lined with old-fashioned houses that hark back to the trading center of Hoi An in the heyday of the 15th century when the town was a significant meeting point for the Japanese and Chinese merchants who flocked here to shop the local silk. 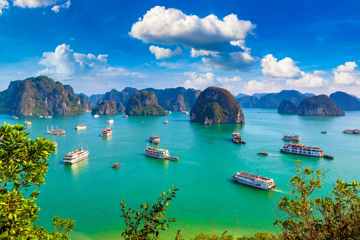