With the world in a state of upheaval, we could use some tidbits of tidbits. The United Nations has released The 10th anniversary of World Happiness Report — just days before the annual International Day of Happiness on March 20.

For the fifth year in a row, Finland has been named the happiest country in the world, with Denmark coming in second, followed by Iceland, Switzerland, and the Netherlands.

The World Happiness Report—which ranks global happiness in more than 150 countries worldwide—is released annually by the United Nations Sustainable Development Solutions Network. Statisticians base the rankings on data from the Gallup World Poll and several other factors, including GDP levels, life expectancy, and more.

With the world entering its third year of the pandemic, the report has three areas of focus for 2022: looking back, seeing how people and countries are dealing with Covid-19, and looking forward to how welfare science will develop in the future.

The good news: This year's report found remarkable growth worldwide in all three acts of kindness monitored in the Gallup World Poll. "Helping foreigners, volunteers, and donations by 2021 are rapidly increasing in every part of the world, reaching levels nearly 25% above their pre-pandemic prevalence," said John Helliwell, professor at the University of British Columbia and editor of the World Happiness Report.

Some other good news, despite the pandemic: "Positive emotions remain more than twice as common overall as negative emotions," said Helliwell.

According to the report, there is still a lot of consistency from year to year in how people rate their lives in the top-ranked countries. So where do other countries make this year's list? In this year's report, the US is at number 16. Our neighbors in Canada, however, beat us, at number 15. France reached its highest ranking to date, at number 20.

In addition to the happiest countries in the world, the report also looks at the places where people are the saddest. Afghanistan is ranked as the most unhappy country in the world, with Lebanon, Zimbabwe, Rwanda, and Botswana completing the bottom five.

So what makes Finland so happy? “Research shows that the high national rankings in this survey are not about culture. It's more about how a nation's institutions care for its people—it leads to higher life satisfaction ratings,” says Aalto University expert Frank Martela, a philosopher and author of A Wonderful Life – Insights on Finding a Meaningful Experience.

According to another expert at Helsinki-based Aalto University, other factors that have contributed to the success of this small country include smart urban planning, access to green spaces to reduce stress and increase physical activity, and effective progressive taxation system, and a well-developed health and education system. strong.

Surprisingly, Finland borders Russia, marking a grim reality during wartime: the happiest country coexists with one of the happiest. Russia comes in at number 80 on the list.

20 Happiest Countries in The World 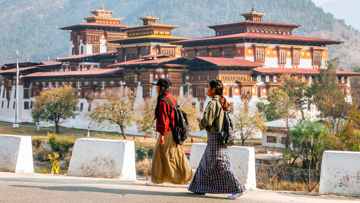